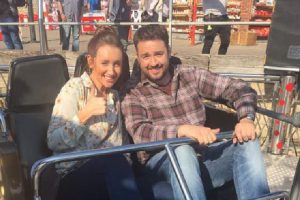 Comedian Jason Manford revealed that Scarborough has “always had a special place in my heart” ahead of the new BBC show of the same name airing.

Several of the show’s stars including Manford, Stephanie Cole, Catherine Tyldesley and Claire Sweeney have spoken with the BBC about their experience of making the programme and filming in the North Yorkshire coastal town.

Asked about his filming highlights, he said: “All the scenes I had with ‘Bigsy’ (Steve Edge) were great because after a 20 year friendship this is actually the first time we got to act with each other.

“Location wise, we couldn’t have wished for better weather so Scarborough looks glorious! I reckon we’ll have done more for tourism there than their own tourist board!”

He added: “Each episode is a really lovely half an hour spent with a group of characters who I think the viewers will really like. It’s funny and warm and feels like just the sort of TV show we need in these current times.”